Investors have battened down the hatches over the past weeks as waves of volatility have dominated the market. Maybe the market calms down and equities resurge, but now, is clear, that late cycle volatility is here and will probably become more violent at each episode.

The recent equity-sell off has heightened uncertainty, with consumer sentiment nicely described through the CNN ‘Fear and Greed Index’ that looks to characterise the primary emotion driving the market (see below). 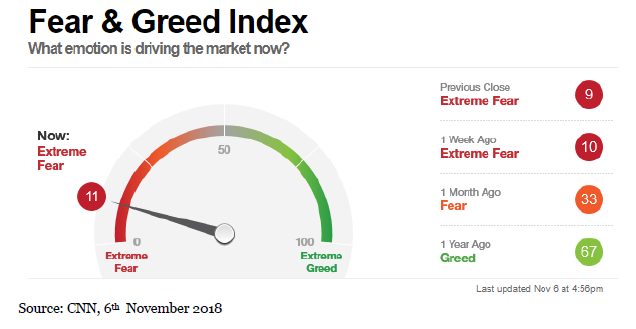 This index sits right now at 11, or ‘extreme fear’. Why? The consensus among investors appears to be that we’re in the ‘late stage’ of the investment cycle. Wall St’s thundering run has lasted a decade – the longest ever. And the market has become increasingly wary because of it.

We have seen a very large sell-off in technology sector stocks with the Nasdaq, which is often taken as a proxy for US tech, recording the worst month since 2012. This suggests that some are losing faith in the continued performance of our recent equity stars (otherwise known as team FAANG).

Adding fuel to the fire, the world has been curiously watching on as China and the US continue their game of trade policy tag. As the reverberations of any decisions by these heavyweights are felt by all, this tension is creating a difficult environment for investors.

Though we are all familiar with the old adage ‘past performance is not an indicator of future performance’, it is sometimes helpful to look back at how previous storms have been weathered.

The traditional market response to a late cycle downturn can generally be characterised by a move away from higher risk equities such as technology or emerging markets, greater focus on essential sectors such as healthcare, utilities and energy, and a general movement away from equities and into cash, short-term fixed income and commodities. As the bull market nears the close of its tenth year many are considering if now is the time to reposition portfolios towards ‘defensive’ assets.

So, what are the options for investors looking to rearrange their equity holdings into a more defensive position?

** Gold is not considered in the risk illustration for two reasons. First, there is no counterparty risk with gold whatsoever (with cash there is still sovereign risk). Second, gold has historically had low correlations with equities, so its risk characteristics work differently.

If you take a glance at global headlines, the US right now may seem a difficult market to play, with high levels of uncertainty around international policy and tariffs.

However, as the world’s dominant economy, many would wish to maintain some sort of equity exposure but with a defensive tilt with an eye on capital preservation as much as growth. The ETFS S&P 500 High Yield Low Volatility ETF (ZYUS) is one option that is designed to achieve this.

As suggested by the name, this ETF has a low volatility filter built into the index construction. The underlying assumption is that companies that don’t exhibit aggressive price movements are less likely to be sold down heavily in a general market sell off.

Specifically, the index universe (the S&P 500) is ordered to select the 75 highest yielding stocks and then the 50 least volatile of those 75 are selected creating a high dividend paying, relatively low risk portfolio based on the trailing twelve months of price data. 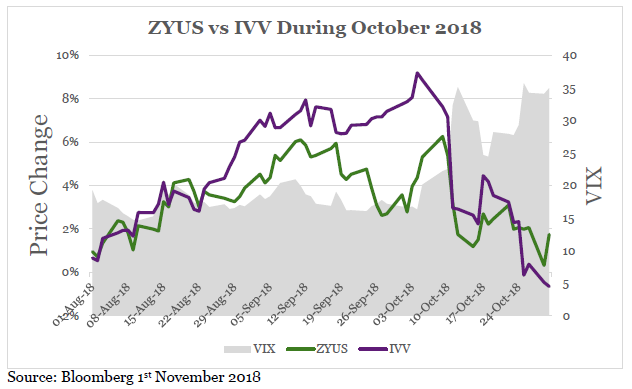 With reference to the chart above it is clear to see that, since the VIX jumped in October, IVV has lost approximately 10% whereas ZYUS has only lost4 %.

Another strategy investors may consider in times of heightened volatility is increasing the allocation to sectors that have historically had greater stability. One such area known for this is infrastructure. The source of this stability can be explained by looking at the industries that fall into this sector: utilities, telecoms, industrials and transport.

These industries typically have high capital costs, low elasticity of demand, long business timelines and often exist as regulated oligopolies or monopolies. Their capital-intensive nature means that they are very difficult and, in some cases, like energy distribution networks, nigh impossible to disrupt. This can mean that these sectors have lower risk (as measured by standard deviation) than other sectors, such as technology or real estate. The table below illustrates the substantially lower volatility of infrastructure against these sectors.

ETFS Core Global Infrastructure ETF (CORE) captures 75 stocks from these essential industries with the lowest volatility, this screen further enhancing one of the most desirable traits associated with infrastructure.

The final step taken by many to increase the defensive nature of their portfolio is to consider an allocation towards commodities such as gold. Commodities like gold don’t have any fundamentals like dividends or yield. However, the lack of fundamentals can be a strength as it means gold tends to have low correlations with traditional asset classes.

In a contracting market, investors often focus on risk management rather than accessing higher returns. This is where a strong case emerges for making a conservative, usually single digit (i.e. 5 – 9%), allocation to gold, such as through ETFS Physical Gold (GOLD).

Gold historically has a low correlation with equities during growth markets and, crucially, a negative correlation in negative equity markets. This means that gold has been successful in reducing the impact of equity losses. The chart below shows the 35% price difference between world equities and gold (in favour of gold) during the GFC. 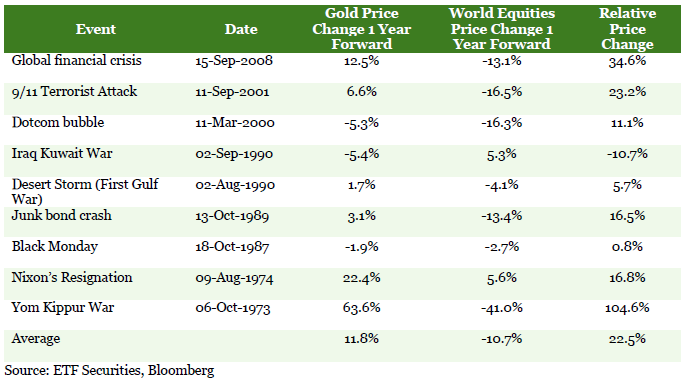 The table also illustrates one of the most compelling reasons for owning gold. This is as an ‘event hedge’. It’s clear from the examples above that, during periods of strife and unexpected negativity, gold would have been beneficial to have in the portfolio in most instances. Some Australians may not consider gold in these terms but perhaps they should.

Below we show four examples of the impact of including these three products in a portfolio has had during the volatile times of 2018. 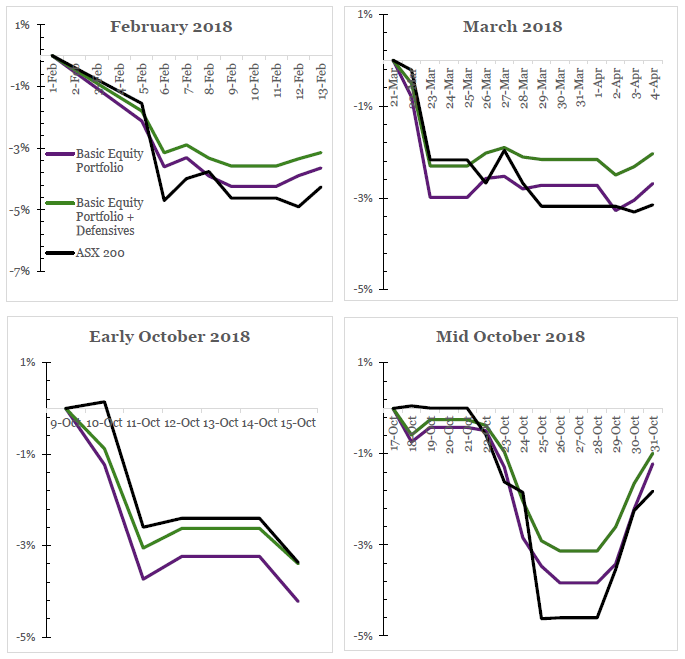 In summary, many believe that the equity cycle has peaked or is getting close to peaking. If that is the case there is a strong argument to incorporate defensive assets into a portfolio to reduce potential losses.

ETFS Australia has three products designed for such a purpose. When put in a theoretical portfolio of domestic and international companies, during three recent volatile times they reduced drawdowns, often significantly. 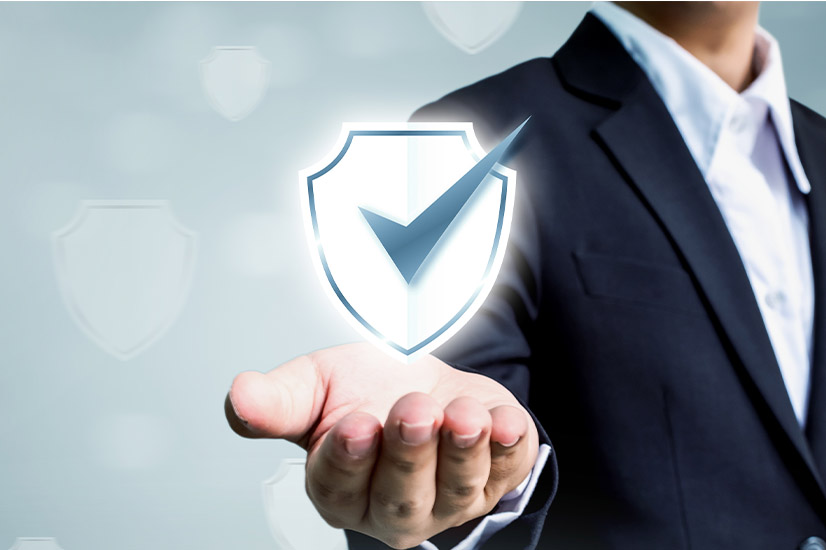 Last Updated: 09 September 2019 Published: 28 November 2018
Forward this article to a friend. Follow us on Linkedin. Join us on Facebook. Find us on Twitter for the latest updates
Rate the article