Australian portfolios are among the least diversified among developed markets, with tech being the largest underweight in domestic portfolios.

This is significant because global tech companies have outperformed global equities over the longer term, have had the highest earnings growth of any global sector and has one of the best dividend growth rates. We expect these trends to continue as tech is exposed to some of the fastest structural growth areas in the market. Valuations are currently attractive but the potential for rising trade protectionism poses a risk.

Australian portfolios are among the most concentrated in the world

Australian investors have among the least diversified portfolios among developed markets. According to the IMF’s latest survey (2014), nearly 67 per cent of Australian portfolios are in domestic stocks compared to Australia’s 2 per cent global weight in global equity benchmarks. 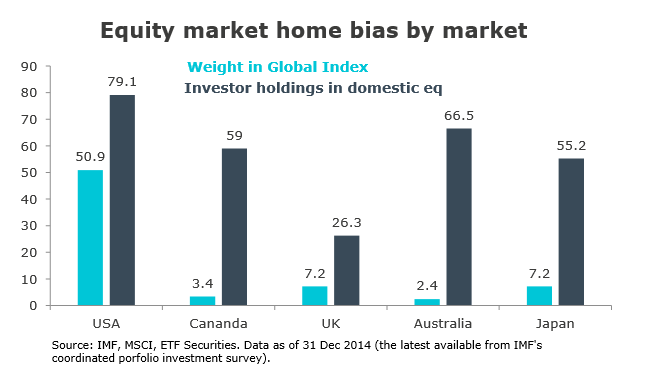 There are good reasons why Australian investors prefer home securities in their portfolios, as franking credits on domestic dividends provide valuable tax relief. However, a high degree of home bias in portfolios can lead to undesirable risk characteristics. One particular problem is sector bias, where some sectors are over-/ under-represented compared to global indices. For Australian portfolios, this means an over representation of financials and materials stocks and a significant under-ownership of the tech sector. 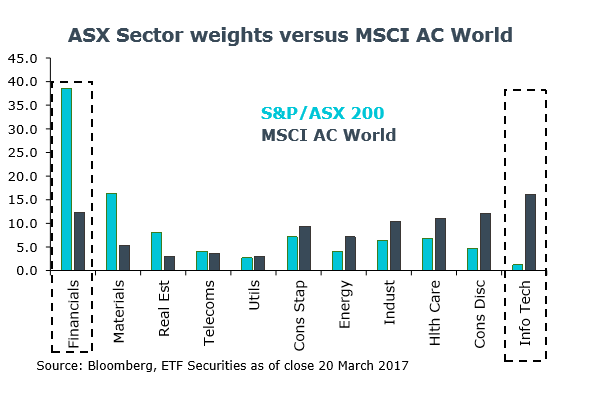 Why should the tech sector be a core holding? 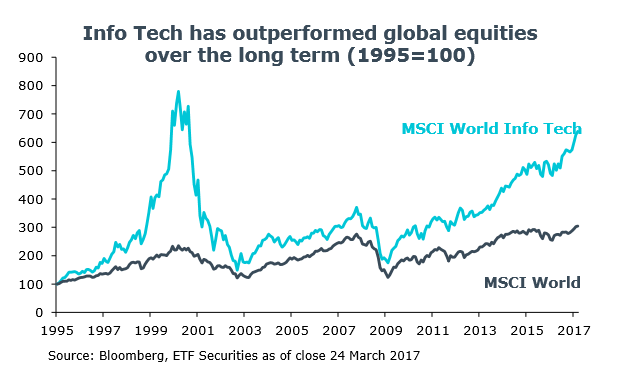 Obviously, sector bias can leave portfolios vulnerable to specific sector risks. For example, the banking sector accounts for half of total dividends paid by the Australian market. As economic growth slowed in 2016, declining bank profitability forced many to cut their dividends, hitting the overall payout for the market.

Quite apart from diversification benefits, though, there are important structural reasons why investors should consider the tech sector as a longer-term investment. First, tech has grown earnings more than any other sector over the last two decades. Earnings per share (EPS) has increased more than 500 per cent since 1995 compared to half that for the overall market. This translates into an annual compound growth rate for EPS of 8.5 per cent per annum compared to 5 per cent for the wider market. 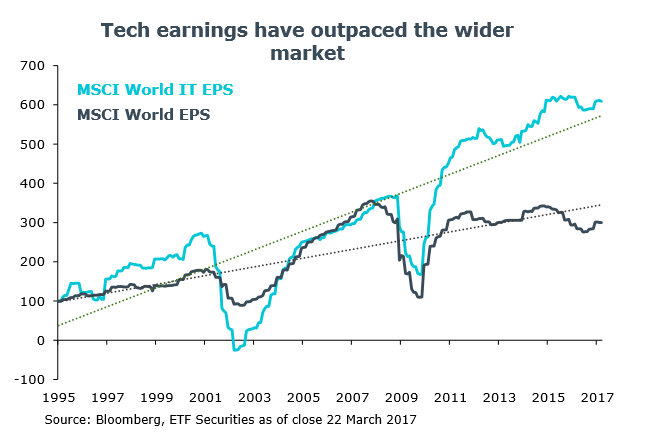 We expect tech earnings to continue to outpace the wider market because the sector is exposed to many areas of structural growth. In the internet space, e-commerce continues to take market share from existing brick and mortar companies and benefits from the growth of internet penetration rates in emerging markets. In software, data breaches are becoming increasingly common, providing a growing opportunity set for security software companies. In addition, IT spend continues to shift to cloud-based software, creating a new set of opportunities in the emerging cloud era. 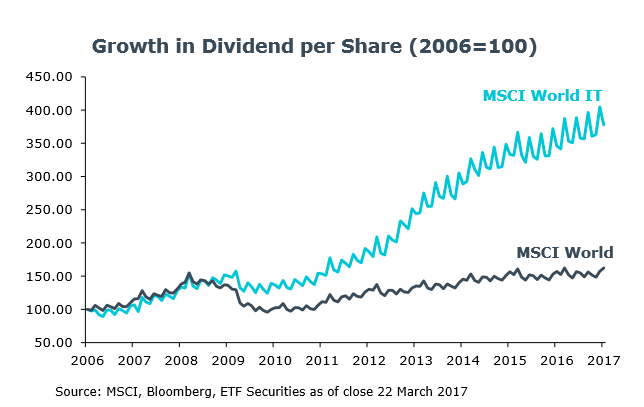 Second, many tech companies are highly cash generative, with cash representing as much as 25 per cent of the valuation of some tech stocks. That cash pile has helped to drive dividend growth in the sector. Dividend per share has grown three times faster in the tech sector than for the wider market.

Third, tech is attractive because it has both defensive and cyclical characteristics, making it well positioned for different market environments. Being exposed to structural growth areas tends to make tech revenues relatively stable and, therefore, defensive. Furthermore, tech companies have some of the strongest balance sheets in the market. At the same time, however, tech earnings are highly correlated with a pick-up in GDP momentum, giving it characteristics of a cyclical sector. Historically, US tech investment growth has had a beta of around 2.3 times to real US GDP growth. Having both defensive and cyclical characteristics means tech can perform well over the economic cycle.

While some prominent tech companies are trading on elevated multiples, this is not true of the overall sector. Even on a market cap weighted basis, global tech is trading close to a 20-year low on a 12m forward P/E relative to the market and on a 20-year high on dividend yield despite its superior growth outlook.

Rising trade protectionism is a risk for the sector given how globalised tech companies have become. The industry is now dominated by companies that depend on the global trade framework to move goods and services through international supply chains. It is too early to tell what the new US administration’s stance will be, but a further rise in protectionist rhetoric would be negative overhang.

In summary, owning global tech can provide not only diversification benefits but also exposure to structural growth stories in the market. Global tech companies have outperformed the wider market over the longer term. Given the sector’s superior earnings outlook and attractive valuations, that outperformance can continue. 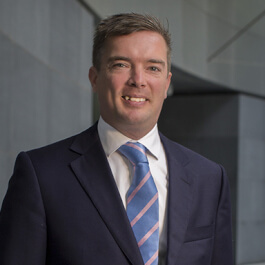 Last Updated: 25 April 2017 Published: 19 April 2017
Forward this article to a friend. Follow us on Linkedin. Join us on Facebook. Find us on Twitter for the latest updates
Rate the article