As 8 November looms with no clear frontrunner, investors are bracing for how markets will react to a still unknown president, with a Trump presidency flagged as being bad news for the Australian economy.

Last week’s revelation that the FBI will be examining newly uncovered emails in Hillary Clinton’s ongoing email saga saw the former secretary of state lose her lead in polls in the increasingly tight presidential race.

“A Trump victory is likely to be initially negative for shares and favour safe havens like bonds and the US dollar as investors would fear his policies on trade in particular. This would be negative for Australian and Asian shares and for the growth sensitive Australian dollar,” Mr Oliver said.

“Australia being more dependent on trade than the US would be particularly adversely affected if Trump were to set off a global trade war.”

However, while Australia could feel the brunt of the consequential fallout, it would not be the end of the world, at least not in the immediate aftermath of 8 November.

“Many of his economic policies could provide a boost to the US economy. The combination of big tax cuts and increased defence and infrastructure spending will provide an initial fiscal stimulus and, with reduced regulation, a bit of a supply side boost,” Mr Oliver said.

“Longer term though, the budget deficit will likely blow out and protectionist tariff hikes would likely set off a trade war, along with much higher consumer prices, and immigration cutbacks would boost costs. All of which could ultimately mean higher inflation, bond yields and interest rates and a hit to growth.”

If Tuesday’s election does result in a Trump victory, it remains to be seen if the combative real estate mogul’s vitriolic presidential campaign continues when he is in the White House.

“It’s partly a case of whether we end up with Trump the pragmatist who backs down on some of his extreme measures such as those around protectionism or Trump the populist who sticks to his policies once president, and whether Congress limits him or not,” Mr Oliver said.

Ms Clinton, promising more modest short-term stimulus policies, would be “more of the same” if she wins the presidency, which is not necessarily a bad thing.

“The best outcome for shares would be a Clinton victory but with Republicans retaining control of at least the House, this would be seen as more of the same. Since 1927, US total share returns have been strongest at an average 16.7 per cent per annum when there has been a Democrat president and Republican control of the House, the Senate or both,” Mr Oliver said.

“There could be some opportunities for compromise on things like corporate tax rates, which both the parties agree are far too high and making the U.S. increasingly uncompetitive globally with other countries that have lower corporate tax rates. I think there's also a reasonable agreement that could be reached on a fiscal spending package, particularly if it were infrastructure-oriented," he said.

While that scenario remains the most favoured by some economists, Mr Perkin says its important investors remain prepared for anything.

“For investors, it's important to not just assume the base case, but to consider the alternative scenarios and associated risks as well.” 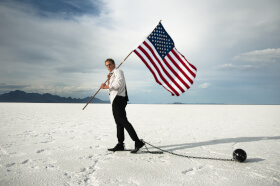