The biggest upcoming market event is not the imminent US election but the Italian referendum, with State Street Global Advisors casting serious doubts about the future of the EU’s currency.

The Italian referendum to be held on 4 December would, if passed, reform the country’s government, reducing the power of the Senate and eliminating some overlapping areas of governance.

While proponents of the bill say the much-needed reform will enable the government to better deal with the ongoing national banking crisis which continues to threaten the stability of the EU, SSGA Investment Solutions Group head of strategy Thomas Poullaouec says a negative outcome could have dire consequences for the euro.

“We don’t think the US election is going to rock the boat, rather the thing that is on our agenda for the next few months is the Italian referendum. We think that the issue of European politics is of high significance and that it could really dominate markets if the referendum returns a ‘no’ result,” Mr Poullaouec told Nestegg.com.au

With Prime Minister Matteo Renzi promising to quit if the referendum fails, the scenario shares an uncanny resemblance to June’s Brexit which saw then-British prime minister David Cameron stepping down following a ‘yes’ result that surprised many.

Such events promise to sustain volatility in global markets, with Mr Poullaouec saying that the euro could soon be a failed experiment unless its politicians address some structural issues.

“In our minds, either the European countries will get together and fix it, or one day the euro will be gone because it’s not a sustainable solution anymore. Italy is already a postcard for that,” he said.

“Since the introduction of the euro, Italian GDP is down 10 per cent, in Greece it’s down 30 per cent, and that speaks to the fact that its introduction has eliminated one option they used to have when they had an economic problem which was to boost their economy through currency devaluation,” Mr Poullaouec explained.

“Now that’s gone, you can see how they don’t benefit that much from an economic standpoint from the euro.”

The rising support for the Italian Eurosceptic Five Star Movement, combined with other geopolitical factors, means European stability will continue to prove a risk factor for markets.

“That coupled with the refugee crisis and terrorist attacks are creating a sense of fear and uncertainty in the population in Europe. So you have weak economics, you have a sense of insecurity which means you have groups willing to vote for the populist parties, which are not prepared to make Europe better, but want to make their countries isolated,” Mr Poullaouec said.

If the referendum fails, it would likely strengthen populism both in Italy and in Europe.

“If Prime Minister Renzi resigns, they will have new elections and who is winning the polls? The Five Star Movement. If they come into power, they will have a referendum on whether Italy will stay in the EU,” Mr Poullaouec said.

He added that even if populist parties do not win, they pose a risk to the stability of the EU and its economy.

“So the third largest economy in the eurozone is likely to have this referendum [on whether to stay in the EU] in the years to come and they’re not the only ones. There will be elections in the Netherlands, in France and in Germany.

“[Populist parties] may not always win, but they are having an influence which is very negative for the European state.” 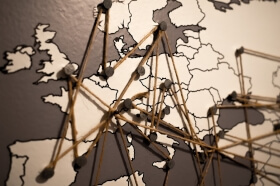 Last Updated: 03 November 2016 Published: 01 November 2016
Forward this article to a friend. Follow us on Linkedin. Join us on Facebook. Find us on Twitter for the latest updates
Rate the article